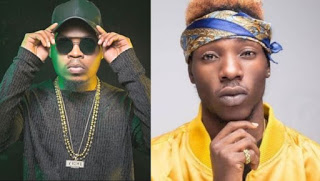 Report reaching us at the 9jakingmusic HQ, is that Olamide has dumped the vast rapper, Davolee from the YBNL camp.The information is not yet confirmed as at the time of filing this report though. Perhaps Davolee just dropped a new smashing hit tittled “Way“.Listen & Download “Davolee – Way”

DOWNLOAD
We felt the report was true, as we found out that until now the YBNL Boss, Olamidehasn’t gave the new song “Way” any form of promotion.
And also, the artwork of the new song carries no form of any YBNL imprint, which shows that the fast rising rapper is on his own now.
There is a particular Yoruba rap verse in that new song that address the issue him between him and the label, but it was not spelled outrightly though, only real music lovers will decode that and knows who he’s talking too.The rapper came into limelight in the year 2017 with his first single tagged “Fal Barestiv” under YBNL, afterward some other average song came on.With the success of his new hit “Way” I personally felt optimistic that Davolee is back on the track of doing good music again after long time of hibernation from the scene.

The big question now is

Do You Think Davolee Can Survive The Industry Struggle After He Left YBNL?